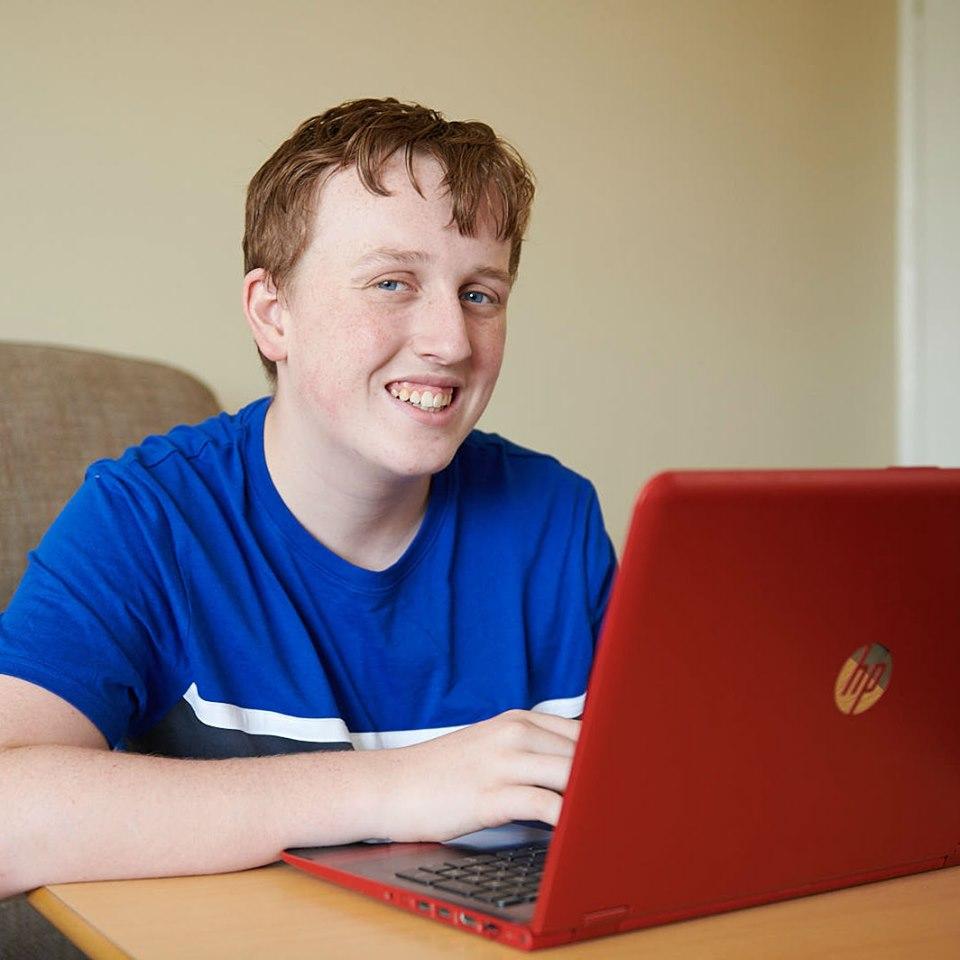 Charlie was diagnosed when he was very young, just a few months old, with optic nerve hypoplasia and nystagmus. Around five years ago, towards the end of primary school (in Year 6), his sight started to take a bit of a dip. Following tests, he discovered that both also had ocular albinism.

Charlie struggled in Year 7 when he went to secondary school, "The school didn't necessarily know what to do because at that time I was actually the only visually impaired child in secondary school in Lincolnshire," said Charlie.

"We had always struggled on being able to get the kind of resources that all the others had. Textbooks for school, revision guides. Basically, anything that any other student can get from a teacher."

He's currently studying for his GCSEs, and he says that "RNIB Bookshare is probably one of the best things to happen ... I'll go to my TA and say, 'Oh, can we get this off RNIB Bookshare, please' and, she'll put it on my laptop. It's been a massive help for me."

How does Charlie use the books from RNIB Bookshare?

Charlie reads large print resources. "I do have some sight, a little but I do have some. In terms of reading materials, I've always been able to read size 72."

"Some of them I use as PDFs. Sometimes I'll convert them to Word because, if I use Macbeth as an example, in English I can make my own annotations and notes, like anybody else in their book."

Studying for his GCSEs

"In Year 11 when you're heading towards your GCSEs, you really, really want to be revising and being able to do as much independent revision at home is amazing. It's a great help for any student, whether visually impaired or not. Many fully sighted students are able to revise whenever they want to but for visually impaired students, it's much, much harder, especially if you need really large text.

"It would have been almost impossible if I didn't have RNIB Bookshare. Being able to come home and revise independently has been a massive help for me and, fingers crossed, it can improve my grades."

"I think that every school, needs to know about RNIB Bookshare 'cos my school didn't know about it.

"None of the teachers at my school knew that that stuff was available until we showed them, and they're like, 'Oh, where did you get that from, that's going to be a massive help'.

"I think schools need to know about all this stuff."

Charlie's advice to other learners with sight loss

"The only advice that's ever needed is, never stay quiet. Always speak up. Because there is so much help out there,  from the RNIB, from local authorities, from different schools.

"There are so many great organisations out there that will give so much help, you just need to tell them you need it."

Charlie's dreams for the future? He wants to be a barrister.
"I'm going to stay on. The plan is to do psychology, government politics and history at A-level and then go on to law at university."

We know that RNIB Bookshare can support him throughout his education. Best wishes for your exams and the future Charlie!
(30 May 2019)

Charlie says that he would never have got these grades without the help of RNIB Bookshare and the accessibility of the course texts really made the world of difference. He’s back in school studying for his A-levels (Psychology, History, Government & Politics) and is also volunteering as a teacher’s helper at his school to help Year 7 students.  (September 2019)

With your support, RNIB Bookshare can continue to help young people like Charlie to achieve their goals and fulfil their dreams for the future.

I want to make a donation